You are here: Home / Salome’s Incarnations / 2004 – Something In The Way She Moves

Something In The Way She Moves 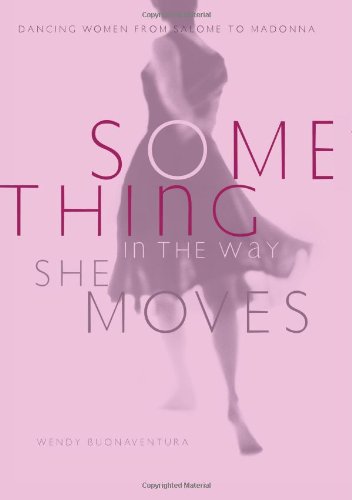 Title: Something In The Way She Moves: Dancing Women From Salome To Madonna

Dancer and dance historian, Wendy Buonaventura, explores the role that dance has played throughout history, and the conviction of its power to provoke unwanted behaviour.

The female body has been an object of sexual obsession throughout history, the focus of dreams and fears. The fashion and beauty business, organized religion, the entertainment world, the media and the medical establishment have all staked their claim to this fertile territory. Women have long been assumed to reveal their true nature through their bodies, and aside from giving birth this is most in evidence when they dance. According to many historians and other commentators, the main purpose of dance is either to stimulate sexual appetite or act as a substitute for sex. At different periods throughout history, dancing has been banned by governments who feared its potential as a source of social chaos. Professional dancers have been seen as the most dangerous of all women, a reflection of the idea that men are powerless to resist temptation when it’s put on display. (9-10)

It goes without saying that creating a sexual display isn’t necessarily what someone has in mind when they get up and move, urged on by the seductive power of music. But for people obsessed with sex even piano legs or the sight of a woman’s face can send pulses racing. How much more troubling is the spectacle of a woman moving her body rhythmically to music! (11)

2004 – Salome And Other Decadent Fantasies

2010 – Revelations, The Testament of Salome
Scroll to top