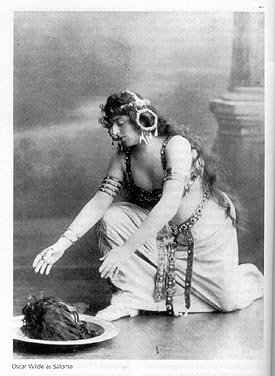 Oscar Wilde in costume as Salome

The Dissemination of Oscar Wilde’s “Salomé” Across the Arts. Polina Dimova

Wilde’s play stages a battle between language and the senses, which results in the decay or crumbling of language and the emancipation of the senses. While language’s communicative potential is exhausted, vision and music prevail. (47)

… it was the Irish author’s one-act tragedy that helped transform the biblical theme into one of the most suggestive cultural myths of the fin de siècle. Portentously hinting at transgressive sexuality, morbid eroticism and blasphemous idolatry, which initially provoked the censor’s ban on both sides of the Channel, the play touched the nerve of contemporary ideological concerns. Essentially, these consisted of ‘the supremacy of artistic power in the face of political and religious authoritarianism; the assertion of female agency in the face of patriarchal authority; and the unapologetic expression of sexual desire in the face of cultural taboo and injunction’. (49)