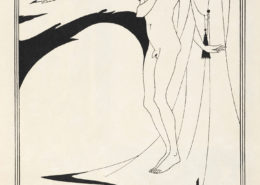 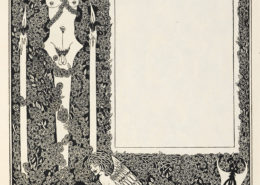 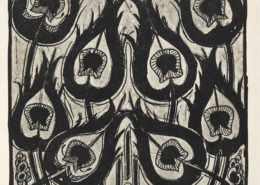 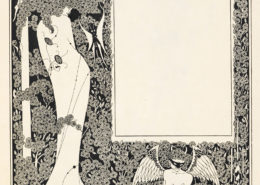 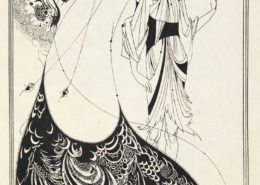 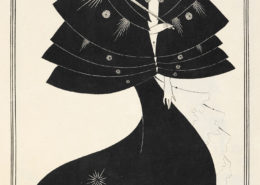 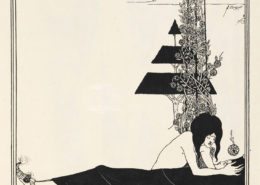 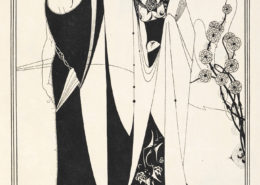 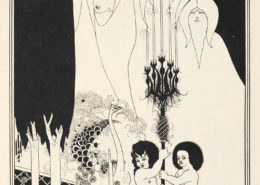 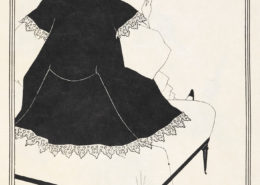 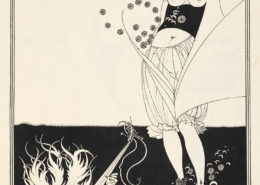 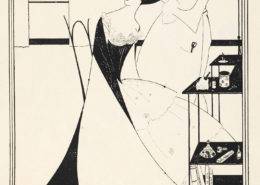 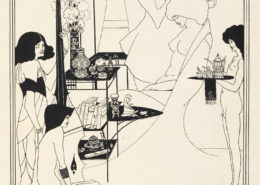 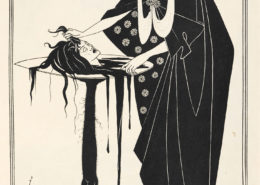 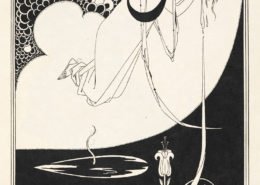 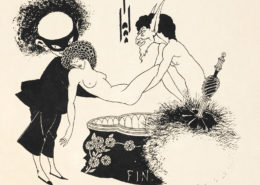 Published: in French in 1893. In English with illustrations by Aubrey Beardsley in 1894

Wilde coined the title “Dance of the Seven Veils”

Oscar Wilde’s play is the first incidence where Salome is independently responsible in her request for John the Baptiste’s (Iokanaan’s) murder. In retellings prior to this she is an agent of her mother’s political machinations.

This play sets up motivation for Salome’s choice to have Iokanaan killed: she feels oppressed by her stepfather’s predatory gaze, sees that Iokanaan holds high value to Herod, and understands that her femininity is her source of power to both entice and harm these men.

The narrative builds on several elements set out by Flaubert in the short story, Herodias. At his birthday party, King Herod is surrounded by philosophical men from a broad variety of cultural and faith traditions. They are all interested in the captured prophet, and would like to have him either freed or killed for various reasons. They also discuss the stories about a new prophet, Jesus, and debate the alleged details of his activities. Iokanaan’s language is cryptic at times and difficult to interpret, however he clearly slanders Herodias for her immoral behaviour. Herod does not protect his wife’s reputation; instead he dismisses her distress at the attacks.

At the beginning of Wilde’s stageplay, Salome comes up to the terrace for air – she is feeling suffocated by her stepfather’s gaze and by his loud, quarrelsome guests.

When her stepfather follows her, and with him his entourage, Queen Herodias says to King Herod, many times, that he must stop looking at Salome. This indicates that he must stare at Salome with inappropriate frequency. Salome would feel this predatory gaze and want to free herself from it.

Iokanaan’s prophesies herald the coming of a new king, which is the reason for Herodias’ political cautions in Flaubert’s story. In Wilde’s script, Herodias isn’t involved in the political discussion surrounding her; she is irritated by it. The primary harm of Iokanaan’s prophesies here is that they slander Herodias’ womanhood. When Iokanaan learns of Salome’s identity, he launches the same attacks against Salome.

Iokanaan accuses Herodias of “giving herself” to Chaldeans, Assyrians, Egyptians, and of incest for marrying her brother-in-law. When he learns of Salome’s identity, he demands she not look at him and keep her distance from his holy self.

Salome practices her power of seduction by flirting with a young Syrian, Narraboth, who holds the keys to release Iokanaan from his prison so that she can look at him. She knows of her stepfather’s fascination with the imprisoned prophet. She knows of her mother’s distress about the prophet’s opinion of her. She also knows that her own father had been imprisoned in the same cistern where Iokanaan is now held. All of this would lead her to want to see him firsthand.

Salome realizes quite quickly that her own womanhood has the power to repel Iokanaan and she would feel powerful in her ability to affect this seemingly powerful man who is clearly disdainful of her mother and of her – perhaps of all women.

Herod places greatest importance on the political and mystical conversation of the men around him. He keeps Iokanaan alive, despite the threat of another king’s approach, because he likes the mystical predictions and he likes to have domination over the Jews who want Iokanaan. He participates in the men’s conversation by trying to decipher the prophet’s riddled messages. He sometimes interprets them literally, and sometimes touches metaphorical meanings, although it is clear he’s in over his head amid the company he keeps.

Herod wants to consume his stepdaughter. He disregards his wife’s concerns, and doesn’t protect either of his women from Iokanaan’s attacks.

If femininity/womanhood is the locus of attack, it is the locus of the wound. And it becomes the weapon of revenge. Herod and Iokanaan fundamentally disdain women, without repentance.

Salome sees this and chooses to use her available weapon to harm both predators in the way that each man is most vulnerable.

She flirts with Iokanaan and laughs at his disgust with her. She then orders him murdered, which will silence his voice against herself and her mother.

She seduces Herod by leading him to believe she will yield to his lascivious requests, and then asking him to commit an act that he desperately opposes.

With her request for the murder of Iokanaan, Salome punishes both men and asserts her power over their weaknesses.

Herod’s last command to kill Salome indicates that no man whose pride has been so wounded knows how to live on with the perpetrator. Oscar Wilde knows this about masculinity, and understands that men’s retaliation when faced with their own weakness is to lash out yet again and more viciously. There is no way that Herod can take responsibility for his part in the activities that have unfolded, he must have all evidence exterminated.

What the script tells us about historical events leading up to this evening’s activities.

Second soldier: For instance, the tetrarch’s brother, his elder brother, the fist husband of Herodias the Queen, was imprisoned there for twelve years. (8)

Salome’s father was imprisoned for twelve years in the cistern where Iokanaan now resides. If she is in her teen years, it would mean that for most of her life she hadn’t seen her father.

The former tetrarch is the current tetrarch’s brother. This means Herodias has been intimate with two siblings. Salome’s father-in-law is also her uncle.

Salome: who was that cried out?

Salome: Ah, the prophet! He of whom the tetrarch is afraid? (11)

We can deduce that Salome has not been on this terrace before and heard Iokanaan’s voice directly.

Salome: He says terrible things about my mother, does he not? (12)

Salome knows Iokanaan has a history of insulting Heroidas, and has probably heard what some of the insults are about.

Salome: Often I have heard the tetrarch talk of him. I think he is afraid of him, the tetrarch. (14-15)

Herod talks about Iokanaan often with a tone of fear or reverence or awe.

The young Syrian: But the tetrarch has formally forbidden that any man should raise the cover of this well. (16)

Herod has a reason for keeping Iokanaan alive and imprisoned, but he does not want to risk Iokanaan’s escape in any way.

Iokanaan: Bid him come forth that he may hear the voice of him who hath cried in the waste places and in the houses of kings. (17)

Iokanaan has perhaps had audiences with very low people and very high people in his life of prophesy.

Iokanaan: Where is she who gave herself unto the captains of Assyria, who have baldricks on their loins, and crowns of many colours on their heads? Where is she who hath given herself to the young men of the Egyptians, who are clothed in fine linen and hyacinth, whose shields are of gold, whose helmets are of silver, whose bodies are mighty? (18)

Iokanaan knows about Herodias’ life history. We can deduce that Herodias has worldly experience. Whether sexually promiscuous or not, she has kept company with men of many cultures and has caught attention in doing so.

First soldier: The tetrarch will not come to this place. He never comes to the terrace. He is too much afraid of the prophet. (27)

Herod never or rarely comes up to this terrace. Or if he does he sneaks up alone so that no one sees him.

Herodias: You are always looking at her! (27)

Herod frequently watches Salome. Herodias notices this, and she doesn’t like it.

Herod: he had very languorous eyes. I remember that I saw that he looked like languorously at Salome. Truly, I thought he looked too much at her. (30)

The young Syrian who killed himeself, called Narraboth, was enamoured of Salome and didn’t hide is admiration. Also, Herod is jealous of Salome’s attention to other men.

Herodias: My daughter and I come from a royal race. As for thee, thy father was a camel driver! He was a thief and a robber to boot! (32-33)

Herodias and Salome have royal lineage and are used to living in privileged society. Herod – and probably also his brother, the previous tetrarch – has been elevated from poverty or lower society and is therefore new to his royal position and privilege.

Herodias: It was thou didst snatch me from his arms.

Herod won Herodias’ attention or affection or loyalty in some way from his brother. There was competition between the brothers that led to Herodias switching her attachment from the older to the younger.

Herodias: I have borne a child. You have gotten no child, no, not on one of your slaves. It is you who are sterile, not I. (48)

Herod has not produced any heirs to his throne. This would be seen as a weakness in a monarch.

Herod: And I have never failed of my word. I am not of those who break their oaths. (52)

Herod believes that he always keeps his promise.

Herod: I have jewels hidden in this place – jewels that thy mother has never seen; jewels that are marvelous to look at. (60)

Perhaps Herod has stashed stolen treasures gained from his father’s days of robbery.